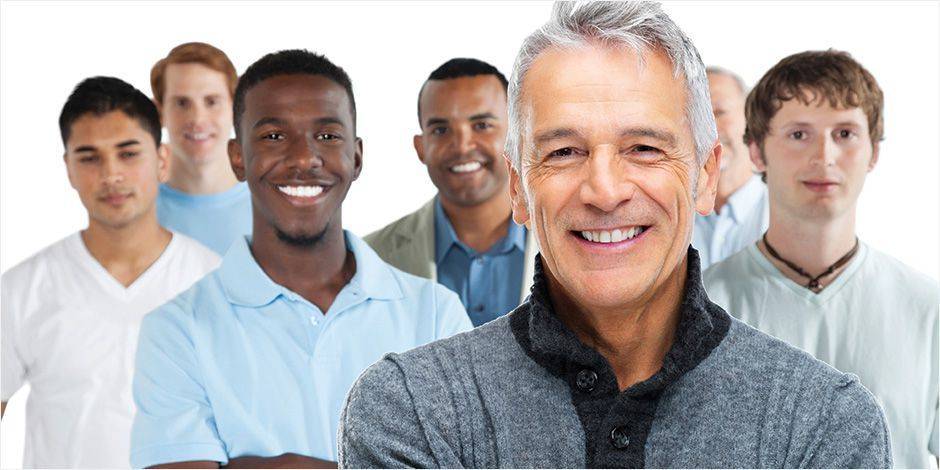 Male Pattern Baldness, a condition affecting more than two-thirds of all males, is the result of hormonal changes that cause the hair follicle to shrink and grow at a steadily slower rate. Eventually, growth ceases completely and the hair falls out, usually in a predictable pattern. The vast majority of men in this country have significantly thinning hair by age 50. You’re not alone.

We all know that hair loss changes how we look, but it can also affect how we feel about ourselves. Perhaps you’re experiencing a decline in self-esteem or feeling less confident at work or in social situations. Our society identifies the loss of hair with growing older and slowing down. Even though you may not feel those things, how others see you – and how you see yourself – impacts your behavior.

The obvious goal of a hair restoration for men is to create a fuller head of natural-looking hair, but other benefits come with looking younger and feeling better. Both men and women report being more confident in their interpersonal and social relationships. Their business performance often improves. They feel more self-assured, more engaged in life and project a stronger, more positive self-image. The impact of successful augmentation is definitely life enhancing. For some people, it can be life changing. With so much at stake, you want a hair therapy you can trust.

The are several options for treating hair loss in men: there are prescription medications taken orally, medicated topical solutions, hair restoration surgery, and laser therapy. There are many factors to consider when deciding on a treatment option. Read more information on how to choose the best treatment option for your hair loss. Hair loss medication, such as minoxidil and finasteride, and laser therapy are targeted towards stopping or slowing hair loss and in some cases even reversing hair loss. Hair transplantation surgery transplants real hair from another area (typically the back or sides of the scalp) and is transplanted or moved to the area where the hair is being “restored.”

Low-level light treatment is available for patients who are suffering from either male or female pattern hair loss. Visible red laser light is effective in stimulating energizing within the cells of the hair follicle. Low-level light therapy (LLLT), now also known as photobiomodulation or PBMT, has been used since the 1960s for varying treatments of medical conditions such as chronic ulcers, and chronic pain such as headaches, musculoskeletal and neuropathic pain without major adverse side effects. LLLT is believed to increase cell metabolism for thicker, lusterous, and more durable hair.

The anti-hypertensive drug minoxidil was shown in the early 1980’s to stimulate new hair growth, and was eventually approved as a topical treatment for male pattern baldness, and baldness in women (specifically “androgenetic alopecia,” or AGA). Minoxidil is known to act as an opener of potassium channels, but the mechanism by which it is effective on hair is unclear. It appears to convert vellus hairs, which are short, fine body hair to terminal hairs – fully developed “regular” hairs. It also appears to normalize the hair follicle, and to increase the “growth phase” of hair follicles. Minoxidil is proven to help slow or stop hereditary hair loss in 4 out of 5 people. Some people will even grow new hair. For a minority of people, it can even grow back lost hairs in the crown area (back of the head).

Finasteride’s (Propecia®) claim to fame is to maintain existing hair. 83% of men studied were able to maintain their original follicle count, and 64% experienced re-growth after 2 years. Propecia does this by inhibiting the creation of DHT in your system. DHT is a naturally occurring hormone which assists with sexual development in males during fetal development and puberty. When a man begins to undergo that second “change of life,” DHT becomes some hair follicles’ worst enemy. Follicles at the front, top, and upper back of the head in most men are genetically programmed to become susceptible to DHT at some point in a man’s life. Those hairs which cover the sides and bottom back of the head typically are not susceptible to DHT, which is why most men do not lose hair in these areas. During hair loss, DHT short circuits follicle growth. This is also an extremely long process, and the cycles for hair growth are typically about 3-9 months. Without a DHT inhibitor either systemically (in the bloodstream) or locally in the scalp, each time your hair cycles, the follicle will become thinner and shorter, and ultimately it will not grow back in. Many side effects from Propecia have recently been found, making it an unattractive treatment option for many.

Male Pattern Baldness occurs in a particular pattern for most men. Keep in mind that the pattern does not apply to women. The seven classifications of male hair loss are depicted below. 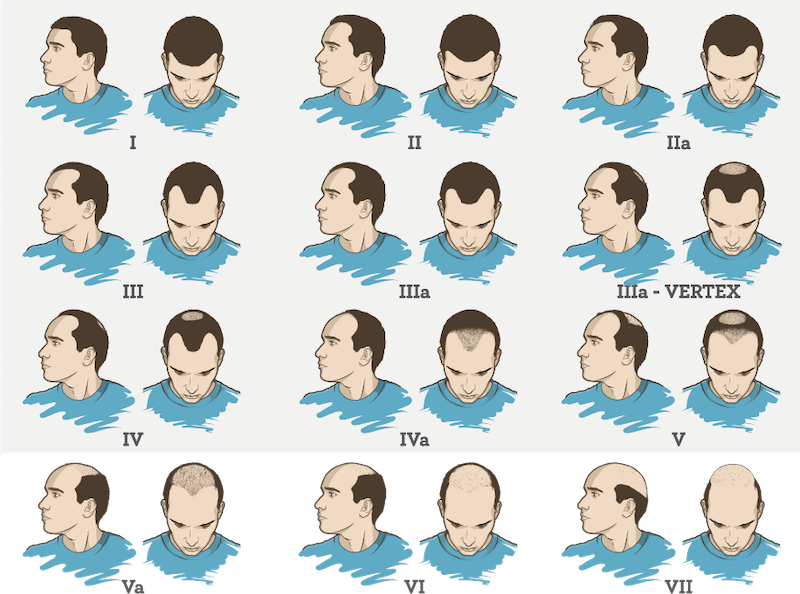