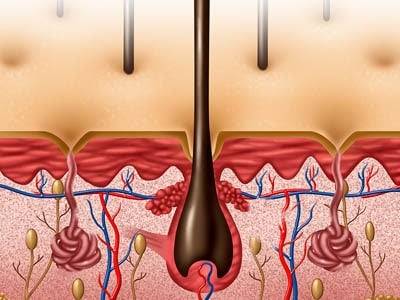 A growing number of hair loss studies are focusing on hair follicles and dormancy, a phenomenon in which the follicle enters into a resting phase and never reemerges. This dormancy is one of several factors that may contribute to hair loss, a condition that affects nearly 2 in 3 men and more than 20 million women in the United States alone. Once dormant, hair follicles cease to produce hair. Hair loss becomes visible as larger and more widespread groups of follicles fall into dormancy, often in a predictable pattern that begins along the hairline and extends backward toward the crown of the head (thus the term, “pattern baldness”).

Most recently, dormancy has been studied by a team of researchers at the University of Colorado. Just a few weeks ago, the team reported identifying at least one protein that appears to cause hair follicles to shut down (source: NewsMax.com). That protein has been named Foxc1, and researchers hope the discovery will some day lead to a stem cell treatment that will prevent hair follicles from falling into dormancy.

While science works to develop a stem cell treatment for hair loss, experts recommend alternative therapies known to improve hair follicle health. One of the most popular options is low level laser therapy (LLLT), a non-surgical treatment that uses a non-invasive spectrum of laser light to induce cellular respiration across the top and sides of the head. It appears LLLT revives dormant hair follicles via phototherapy, a process in which increased cellular activity appears to bring individual follicles out of dormancy. Just 6 minutes every day is the threshold many hair restoration surgeons recommend for men and women who suffer with dormant hair follicles—and the thinning, shedding, and balding that occur as a result.

Learn More About LLLT with Capillus®

Visit the following page to learn more about low level laser therapy (LLLT) with Capillus®. Readers are invited to browse laser therapy caps online, or speak with a LLLT expert at Capillus by calling 1 (855) 506-9427.